The Goddard Birthplace: One Tallawanda Drive 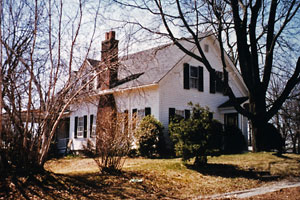 Goddard's Birthplace is located on One Tallawanda Drive in Worcester, Massachusetts. At the time of his birth the homestead was called Maple Hill. He was born on October 5, 1882, in a second floor bedroom of the house which was owned by his family for generations. After Robert died of throat cancer in 1945, Esther returned to the family homestead and lived there until her death in 1981. Esther willed the Goddard Birthplace to both WPI and Clark University, but both schools did not wish to accept the house and it was put on the market.. Esther's good friend and across-the-street neighbor, Kathryn (Kitty) McNamee (co- founder of the Goddard Memorial Association) purchased the house along with her son, John.The house is currently owned by John (Jack) McNamee.